Authorities allowed a six-year-old girl who died of suspected malnutrition to stay home despite her exposure to drug addiction and domestic violence, court documents show.

Charlie was found unresponsive at her family’s housing commission home in Munno Para, in the northern suburbs of Adelaide, in the early hours of Friday morning.

His tragic death at home – which is littered with old toys, boxes, a tent and electrical appliances – sparked a major police investigation into the crimes and led to his five siblings being cared for by the state while their mother is being investigated for criminal negligence.

But court documents show the family was already known to at least three government agencies, including the Department of Child Protection.

In January last year, Charlie and his siblings watched as their ‘drug fueled’ father stabbed their mother multiple times – including in the neck – at their home.

But despite the children witnessing the horrific attack — and their father’s history of domestic violence and drug use — authorities did not deport them. 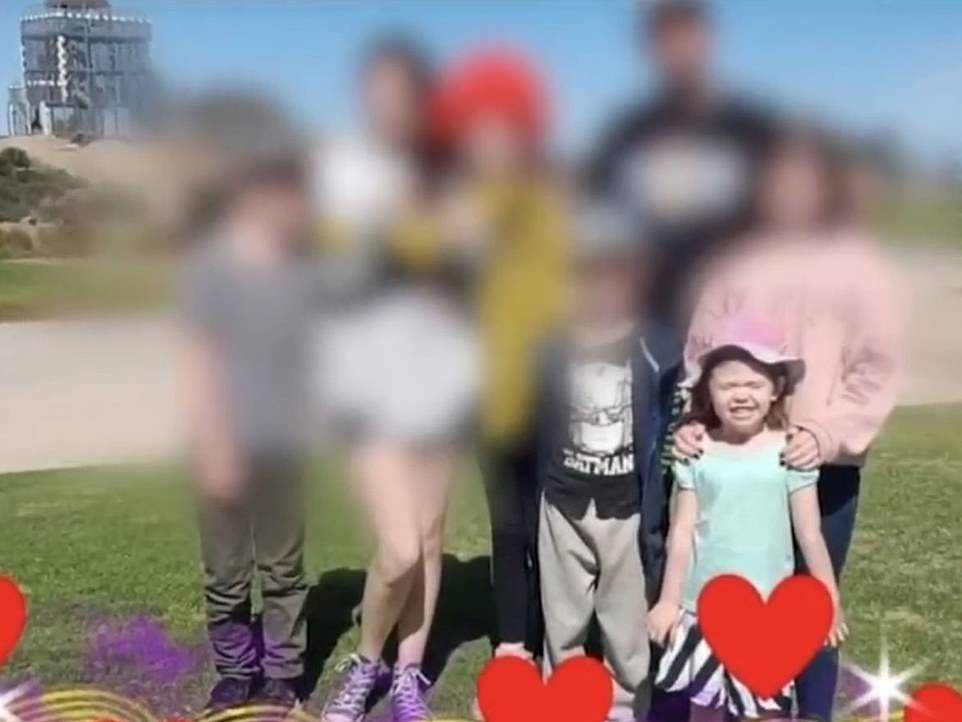 Charlie’s aunt – wearing a pink hoodie with a slogan that read ‘but are you dead?’ #mumlife’ – blasted the media outside the house on Tuesday when asked how his mum was feeling.

‘How do you think she feels? Her daughter just died in her arms! Of course she’s upset.

A neighbour, Bec, told Daily Mail Australia the girl’s mother raised the alarm late at night, leading her to do everything she could to try to save Charlie’s life.

“It was around 1 a.m. and we were about to go to bed, and we heard a knock on the door. Charlie’s mother was screaming “Charlie don’t breathe!” so we ran there.

“She was on the floor in a diaper and she was white as paper… and when I touched her she was stone cold and her eyes were open and staring at the ceiling.

“We did everything to try to make Charlie breathe.”

When they rolled her on her side, they noticed there was something in the girl’s mouth.

They frantically tried to clear her airway, before rolling her onto her back and trying CPR again.

Paramedics arrived soon after and worked on Charlie for half an hour. 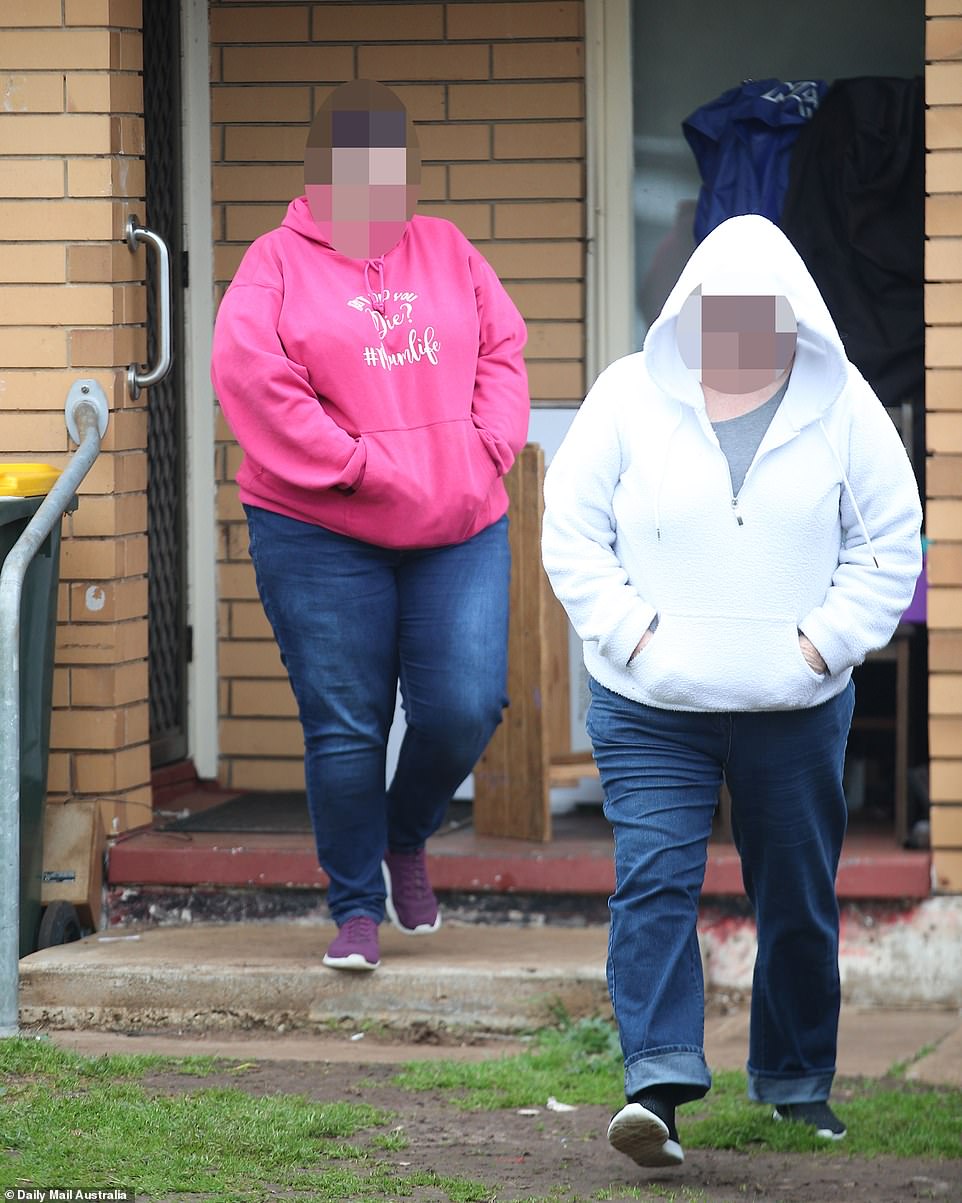 Charlie’s aunt arrived that afternoon, wearing a pink hoodie with a slogan that read, “But are you dead?” #mumlife (photo, left) 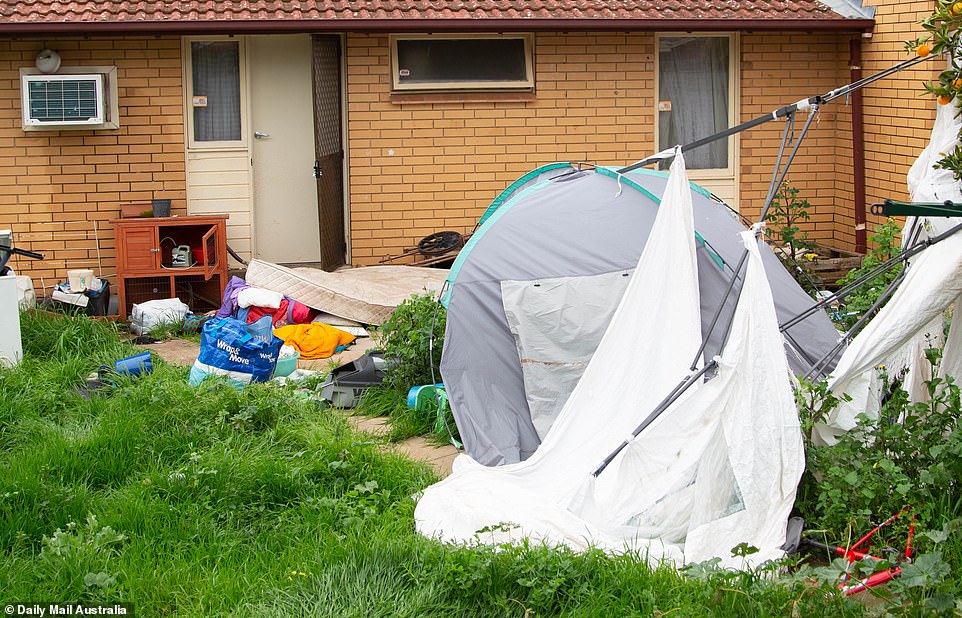 The house Charlie died in was surrounded by rubbish – old toys, a tent, bicycles and a disused freezer 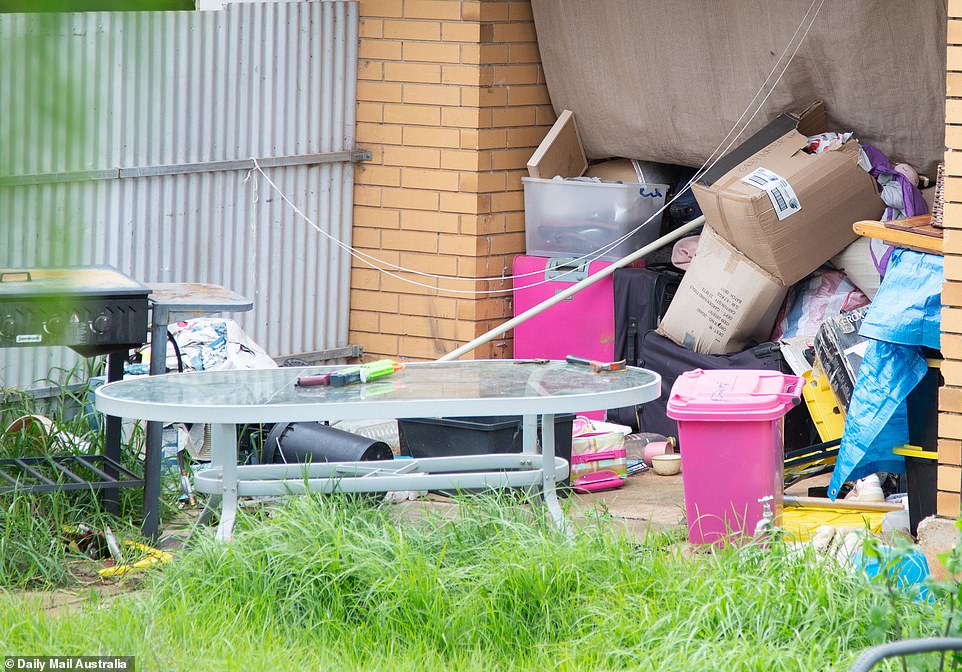 The cause of death is still unknown, but a neighbor said Charlie had something in her throat when she died (family home, pictured)

They tried to clear his trachea to pass a breathing tube down his throat.

Bec said: “The paramedics were able to insert the breathing tube after numerous suctions, but although they managed to get air into his lungs, his heart wouldn’t start.

“They declared her dead at the hospital, but she was gone before that.”

The mum-of-five said the image of Charlie on the floor wearing a diaper, dying on the floor, white as paper and cold as stone, was seared into her mind.

Bec and her sister tried to pull Charlie’s siblings away from the gruesome scene. They were upset by what was happening to their sister.

Asked about the cause of death, Bec said she didn’t know if she had choked or if there were any health issues that no one knew about.

However, she noted that no one saw Charlie in the last weeks of her life as she suffered from a mysterious illness.

She also said the girl and her siblings never looked healthy. They often had head lice, which Bec did his best to help. 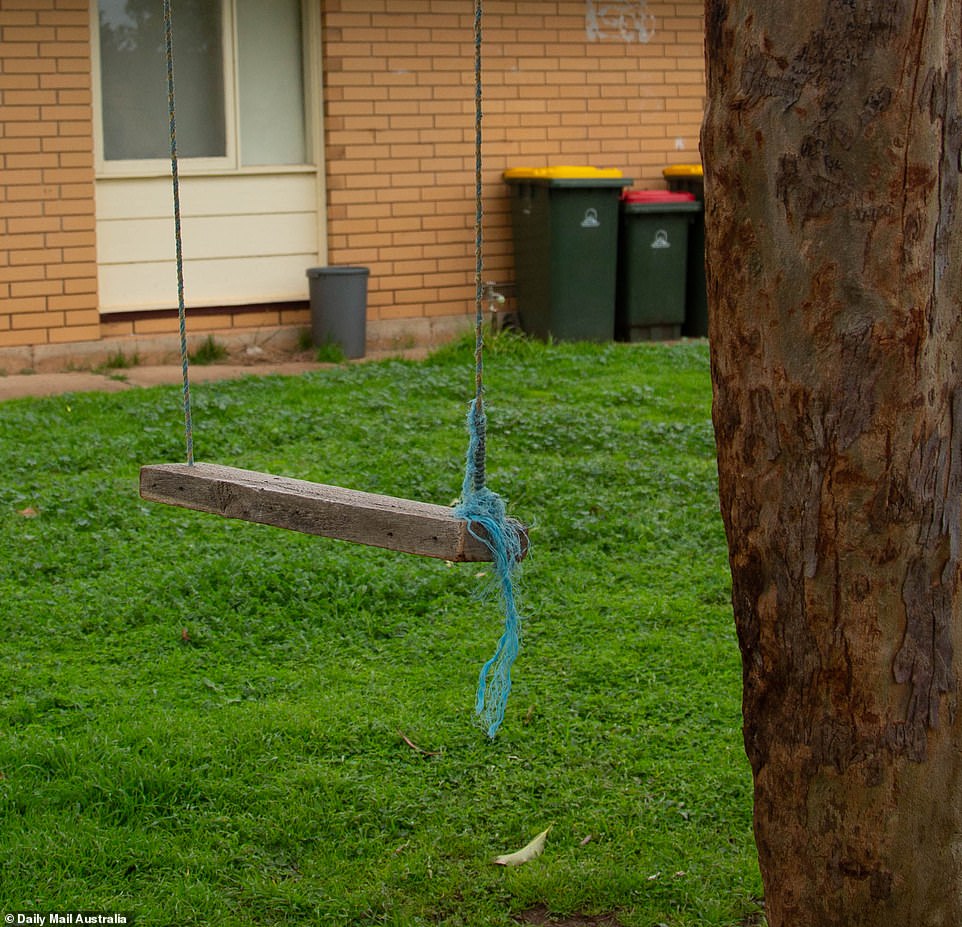 Pictured: The front of the house Charlie died in, which has a single swing in front

Other neighborhood kids who also played with Charlie said they didn’t see her near the end of her life either.

She used to ride around the yard in a small child’s bike with Bec’s toddler, whom Charlie adored.

Bec said the “system” failed Charlie, accusing the Department of Child Protection of not doing enough to save her.

Paramedics were so worried they called police before Charlie was even admitted to hospital, officials said.

Eighteen months ago police were also called to the home after Charlie’s father attacked his mother, his partner of 18 years, during a fight while high on methylamphetamine .

At a sentencing hearing in February, the court heard he had been a habitual drug user for many years and, after quitting for a while, had relapsed the night of the attack.

The fight started in the bedroom before moving to the front yard, where the mother was stabbed three times.

“It (the attack) happened in front of the house and was seen by at least one civilian, who had to pull the defendant away from the victim not once, but twice,” a prosecutor told the court district.

“If it had not been removed, there is no doubt that far more serious consequences could have ensued.”

The prosecutor told the court that the mother wanted to return to her partner despite the stab wounds.

“I think it would be fair to say that the victim probably lacks insight into preserving his own safety,” the prosecutor said.

“I can tell you that the Department of Child Protection has an interest in this case and if the defendant were to return to this house, I would expect the Department to become involved again.” 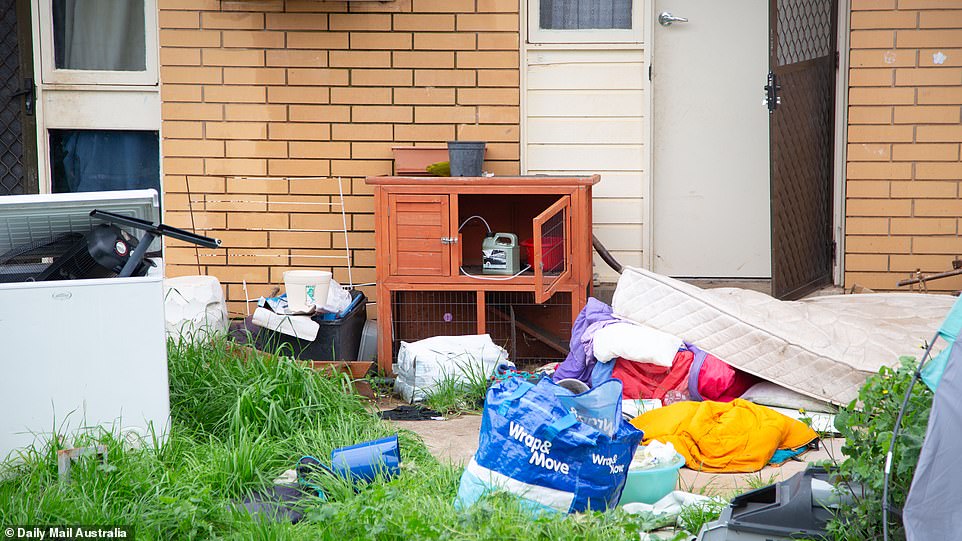 Debris, including an old mattress, bedding and an unused hutch, was seen strewn around the yard of the house on Tuesday

The father was first charged with attempted murder before pleading guilty to the downgraded offense of intentionally causing harm.

Four years ago, he was also convicted of aggravated assault for slapping the same victim in the face.

Now investigators will investigate other interactions they had with the family in the years leading up to Charlie’s death.

Charlie’s uncle, who cannot be named for legal reasons, expressed disbelief at what had happened.

South African Deputy Police Commissioner Linda Williams said the six-year-old’s living conditions were “poor” and said it was too early to assess whether her death could have been prevented.

She couldn’t confirm the last time Charlie had been seen or even attended school.

A special task force has been formed to investigate his death and the circumstances that caused it. 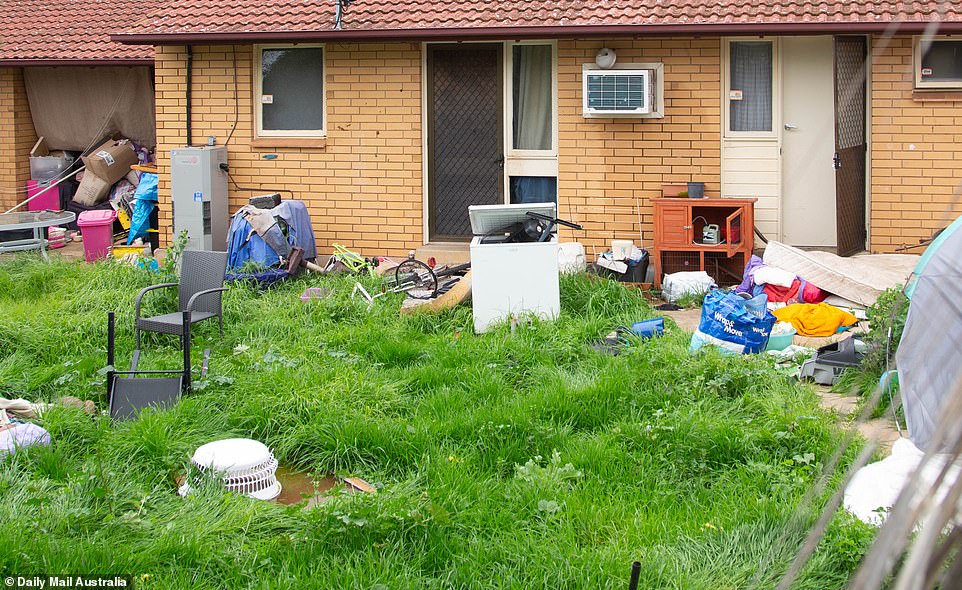 All were removed from the home and are now in the custody of the state Department of Child Welfare.

The chief executive of the Prime Minister and Cabinet Office will determine which services have been engaged, how they have worked together, how effective they have been and what changes might be needed.

Child Protection Minister Katrine Hildyard said these were ‘absolutely tragic and heartbreaking circumstances’ and offered her condolences to Charlie’s family.