I’m in my twenties and probably spent about half of my waking hours burning my eyes out in front of a screen playing a video game to experience life in another world. When I was a younger queer person, this was a great way for me to get away from it all in real time for a second and mentally take myself somewhere else. These days it’s more of a hobby and most of the time when I’m looking to play video games it’s either because it’s gay, an early release, or because it holds a kind of nostalgic power over me that I want to relive. The gay factor being one of the most recurring reasons why I put myself through those thousands of hours of gambling and optometrist bills.

A belated Google search for weird games to play led me down a rabbit hole of games I had never heard of. I realized there were games I missed just because no one ever talked about them and also I wasn’t alive on this Earth when they came out.

After doing a little more research on some of the early gay computer gamers, a few really stood out to me – one of them being GayBlade, a 1992 game created by Ryan Best. The plot was simple. Rescue Princess Nelda from homophobic enemies and bring her back to Castle GayKeep. I knew I had to play this game and learned that after being lost for years it was recently found in 2020 and uploaded to play for free. I accessed the game through an online archive that I’ve used before and loaded up to see for myself.

When you first open the game, you’re greeted by a title screen that includes GayBlade in hot pink lettering with a rainbow in the background, perfect. You are then directed to what appears to be your 2D home base. There’s a potions shop, clinic, gay guild, magic shop, and a door that takes you into the dungeon. After doing some basic exploration and clicking, I figured out that I couldn’t enter the dungeon without rolling for four characters that would make up my party.

The game features six different classes of characters to cast and while my team composition would change drastically considering how many times I died and had to start my team over from scratch, my first group consisted of two mages, a lesbian and a drag queen. Given the character rotation mechanic and dungeon-crawling aspect of the game, GayBlade began to feel like a Dungeons and Dragons campaign.

Before entering the dungeon with your newly formed party, it is essential to enter the shop and purchase the necessary weapons and shields to help you fight your way through. Each character type can wield different items. But instead of getting shields for defense, you can buy condoms or aprons. And instead of swords and other conventional weapons, you can buy mace, hair dryers and pressure nails to fight. 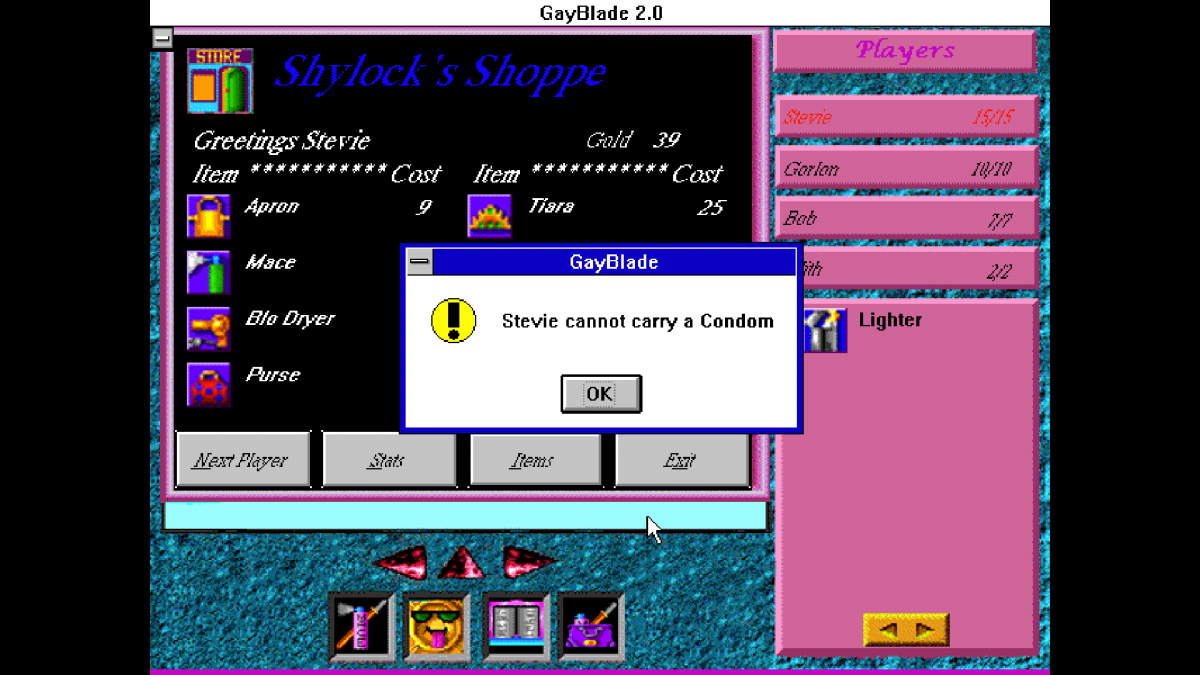 I really enjoyed creating my own gay party and the game’s fun take on item options made me want more games with out-of-the-box options. However, what I didn’t expect was how steep the learning curve was going to be when it came to movement mechanics and combat. I should have realized that after years of playing new games with state-of-the-art control systems and perspective, GayBlade was not going to be a walk in the park. I can’t count how many times during my first run I killed my entire party by accidentally knocking them into walls. 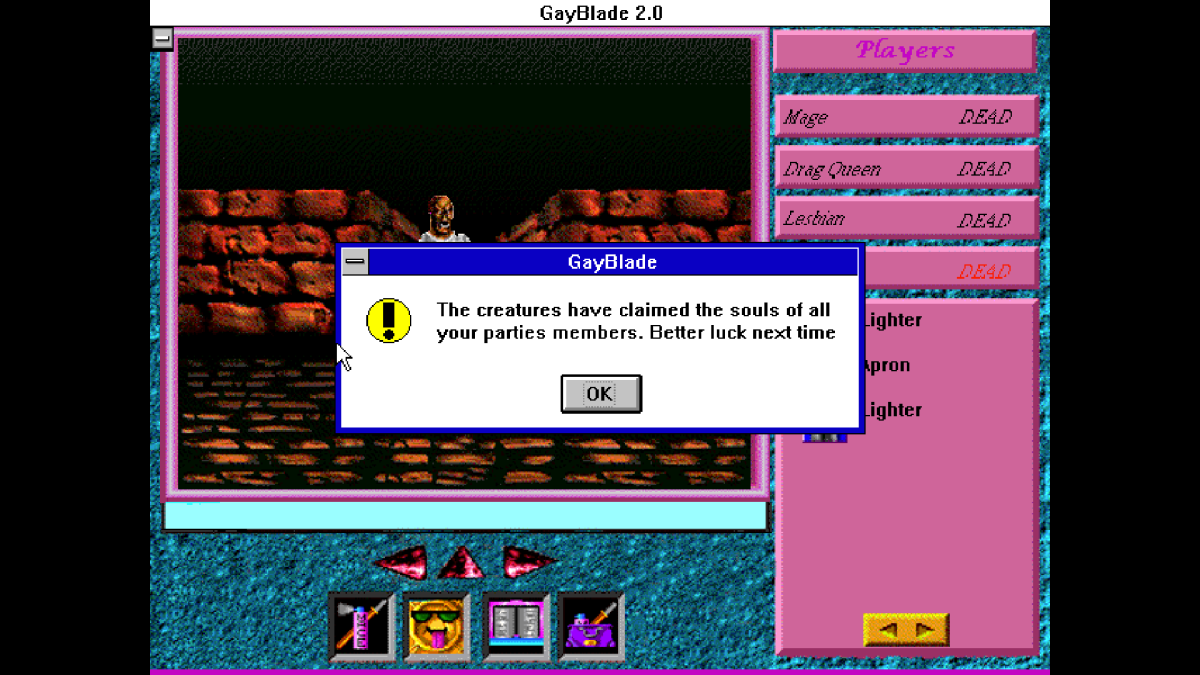 Once I started to master the controls, my next hurdle was learning actual combat. When my first “FBI Probe” enemy came towards me, I started spamming the attack button not knowing if I was doing damage or not. Fights in this game can be extremely punishing if you don’t cast strong characters and take breaks between encounters. Luckily, in GayBlade’s dungeons, there are plenty of enemies to practice attacking with your party’s assortment of press studs and mace boxes. As you crawl through the dungeon, you can face off against the game’s many adversaries like cops, FBI agents, televangelists, and more gruesome individuals who freely call slurs on you as you fight them. Really, it was an experience.

While GayBlade isn’t a game I’d find myself playing for hours on end, it has its charm. The satisfaction I felt when my whole party survived a long period of play or when I managed to revive a key member of the party at the gay clinic was the key to the enjoyment of this point-and-dungeon game. to click. I never managed to save Princess Nelda, but I implore you all to try and save her from the clutches of the homophobic dungeon dwellers.

If you have any queer games you’d like to recommend, past or present, send them to me!

Before you leave! Did you like what you just read? We keep Majority Autostraddle free to read, but its creation is not free! And yet most readers don’t support this indie queer site.. Will you be one of those who will? A+ membership starts at just $4/month or $30/year and they literally keep us from closing. Will you join? Cancel anytime.

Wait, Did House Of The Dragon Address A Deep Game Of Thrones Conspiracy About Daenerys?